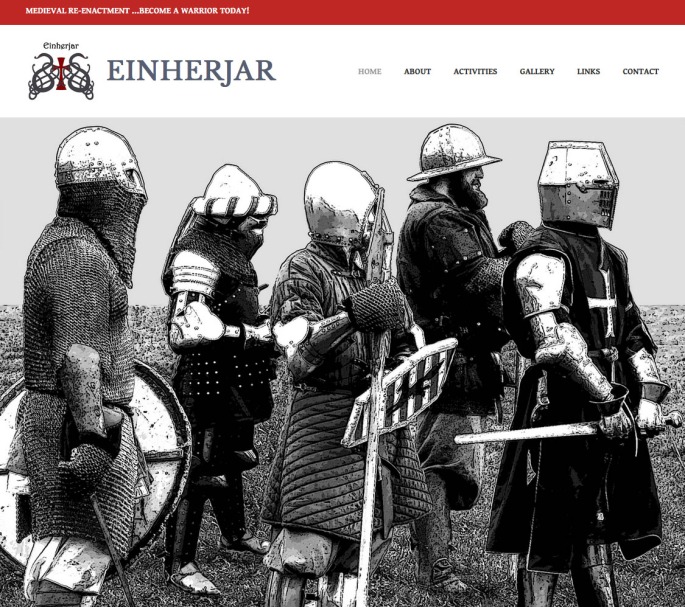 Einherjar has their original website hosted on “Wix” but that website is not accessible on mobile devices so in April 2016 I offered to do a new mobile-friendly website for them using WordPress (with the Karuna theme) instead of Wix. 😀
einherjarnsw.wordpress.com

Another beautiful sunset viewed from my backyard.🌅😍❤️
Another beautiful sunset viewed from my backyard.🌅😍❤️
Another beautiful sunset viewed from my backyard.🌅😍❤️
Sky stories… ☀️⛅️☁️🌄🌕
Lovely Hydrangeas in my garden.🌸🌸🌸
🌺🌅🌸Nature’s beauty…
Tiny violet flower in my garden.💜💜💜💜💜💜
Beautiful rose with a tiny green spidey friend. 🧡🕷
Fuzzy big spidey friend having lunch. 🕷🕸 This lovely specimen was in a bedraggled web stretching between a tree and the top storey of my house, about 2 metres out from the kitchen window. I’m pleased the photo turned out as well as it did as it’s photographed through glass and with the camera accidentally on the wrong settings, lol. 📷
Beautiful wild Foxglove (Digitalis purpurea) flowers, growing by the roadside, photographed at Falmouth during a trip to England in June 2016. 💜💜💜💜
#Tibouchina flowers ...love these pretty #purpleflowers but never had any luck growing them as they always seem to die too soon. So I just admire other people‘s flowers instead when going for walkies with Shelby. 💜💜💜💜💜💜🐶🐾🐾🌸
I love the sunset view from my yard.🌅😍❤️
With all the rain we are having lately various fungi are appearing in my garden. This is one of the more unusual ones — Lysurus mokusin, commonly known as the lantern stinkhorn, the small lizard's claw, or the ribbed lizard claw, is a saprobic species of fungus in the family Phallaceae. The fruit body consists of a reddish, cylindrical fluted stipe that is capped with several "arms". The arms can approach or even close in on each other to form a spire. The gleba—an olive-green slimy spore mass—is carried on the outer surface of the arms. The fruit body, which has an odor comparable to "fresh dog feces", "rotting flesh", or "sewage" when mature, is edible in its immature "egg" stage. The fungus is native to Asia, and is also found in Australia, Europe and North America, where it is probably an introduced species. It has been used medicinally in China as an ulcer remedy. 🍄
Sunny yellow ‘double’ Hibiscus in my backyard.☀️☀️☀️
Reflections 🌿💦

Having a snooze with my new Triceratops after all the excitement of my birthday today.💕🥳🐶💤
Happy Birthday to meeeee! I’m 15 today! I really enjoyed eating my birthday cake!🎂 ...and I had a lot of fun unwrapping my toy Triceratops present and playing with him.😄🎁 🥳🎁
I got a Triceratops for my 15th birthday!😁 Just showing him some love after carefully unwrapping him.💕🥳
Mmmmm… caaaaaake …deeeeeeelicious!!!💕🥳
It’s my birthday today so I’d like to show you the yummy birthday cake I had for breakfast. 🐶🎂🎁🎈🐾 It had 15 blueberries on top of yummy yoghurt and Rose-Hip sprinkles which were covering a raw BARF pattie with chewy surprises hidden inside. The outside edge of the cake was covered in deeeeelicious sardines. The weather was nice so I got to have my birthday celebrations out in the backyard today.💕🥳
Happy Birthday to meeeeee!🎂🥳🎁 I turned 15 today and as usual I had to suffer the stupid birthday hat again. I usually refuse to smile when wearing hats but this time I smiled briefly, just to make Mum happy, hehe.💖💕
It’s very windy outside so I decided to curl up for a snooze in my “desk-kennel” under Mum’s desk while she did stuff on her computer. As usual my slumber was disturbed by Mum moving her chair back so she could take another photo of me. After sleepily looking up to see the camera in my face yet again I quickly returned to the serious business of snoozing.💖🐶
Trying to have a quick snooze while patiently waiting for my turn on the underwater treadmill at the Animal Rehab Klinik, but Mum keeps interrupting my slumber with requests for me to “smile” for the photo …nope, not in the mood …she takes too many photos of me anyway.😛🐶
Enjoying some sunshine while it lasts on a warm, breezy day ☀️🌤 …so over all the rain! 🌦🌧
I still enjoy a leisurely game of ‘soccer’, though these days I do more chewing on my much loved, chewed and scuzzy soccer ball, rather than chasing it.🐶❤️⚽️🐾🐾
Hello …just standing here, feeling good about life, the universe and everything …especially as it’s time for breakfast! 🐶💖💕
Instagram is changing stuff again & Mum & I are not happy about it. When logged in to this @shelbyandjen IG account on a mobile device we now see my carefully curated page feed displayed in 4:3 rectangular photos instead of 1:1 squares. This means all my grid photos are ruined because of the cropping that now occurs.😭 However, not all accounts have changed over yet so some people will still see their own & all other IG accounts with square photos while others will see their own plus all other IG accounts with rectangular photos. When Mum logs into her @jensgardenandsky account she still sees squares. Oh well, no more grid photos from now on, on mine or Mum’s other account (where they will also be ruined for those people whose accounts have been switched to the new layout). 💩💩💩💩 For now the desktop view is still in squares, but the desktop view of all the little circle photos for the Highlights shows the photos squished with a little white strip under each one. Why?????????? 😩
Now I'm almost 15 years old I'm getting a bit wobbly so my family built safety rails with "dog catchers" for the sides of my ramp to stop me falling off and hurting myself. WOOF!! 🐶 You can read more about my ramp and see more photos in my latest blog post called —New “Dog Catchers”— (link in bio).🐾🐾
Inside the hydrotherapy treadmill tank …waiting with Blue Duckie for the water to start filling the tank, then being a Very Good Boy and walking on the treadmill.💦🐾💧🐾💦🐾 And, I just happen to be posting these photos on #TongueOutTuesday so Happy #TOT everyone!🐶👅
Patiently waiting for my appointment at the Animal Rehab Klinik …kinda wondering what happened to the dog behind me though …he looks a little underfed.🤪🐕

The Other Side is listed on the Actually Autistic Blogs List under their category of "Non-Autism-focused personal Autistic blogs, listed by Alexa rank".